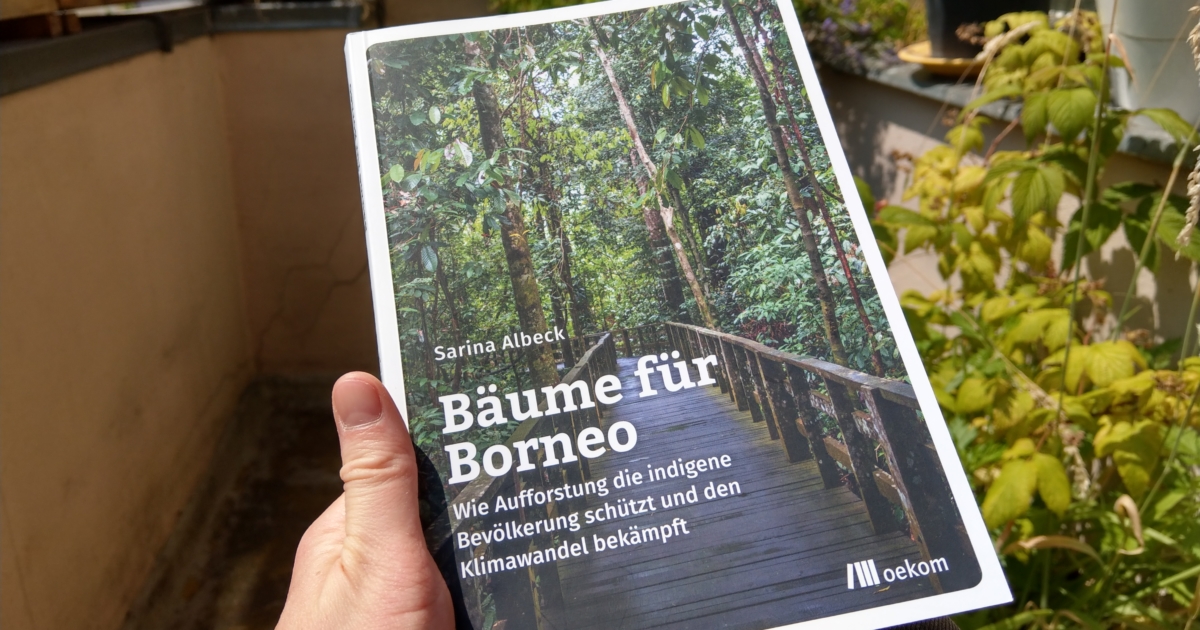 I was very happy when our partner Fairventures sent us the book by Sarina Albeck. What a welcome distraction and opportunity to spend a few socially distanced hours on the sunny balcony – and learn a lot in the process.

In her book Sarina approaches the questions about the causes of deforestation in Indonesia. She does this in a very personal way, starting from the feeling that we all know: it’s not good what’s happening – that should change. But what is actually happening? And why? On the one hand she is dealing the forest, but equally with the people. The following passage is freely translated from German:

There is surprisingly little space for people in our utopia. Sometimes they appear on the margins: as losers of land rights conflicts or as henchmen of corporations in the clearing of large forest areas. Or we imagine them as nomadic primitive peoples who have nothing to do with modernity. Rarely do we see them as normal people with needs and opinions, families living in towns or villages, as farmers, security guards, teachers, saleswomen, men on motorcycles, women with an annoying husband, a sick child who has to go to the doctor, people with a desire to consume (…).

Of course, I point to the point. And I am polemizing. Nevertheless, my impression is that we are allowing ourselves a too simple view of a complex topic. A simplification that is not only useless, but damaging.

The answer she presents as a consequence of her considerations revolves around the concept of Fairventures Worldwide. She portrays Johannes Schwegler, who set up the non-profit enterprise that encourages and enables small-scale farmers on the island of Borneo to plant commercial forests. Why not natural rainforest? Because it would ignore the causes.

Where there used to be rainforest, there are now many open spaces in Kalimantan. Theoretically they could be used for agriculture. Occasionally this happens, but without satisfactory results. The main reason for this is the condition of the former forest soils: they are degraded and hardly fertile anymore. (…) The Sengon is the protagonist of this story.

The Sengon is a pioneer tree – a species that grows even under unfavourable conditions and prepares the ground for other plants. In this way, the land regains its value: catch crops such as peanuts or cocoa can be cultivated. And the sengon grows so fast that it can be felled after seven to ten years.

Sarina introduces the people she has met and talks about what she has seen and how she understood it. She simplifies without becoming under-complex and brings together a variety of reality fragments from which, piece by piece, a rough picture emerges.

The 170 loosely printed pages are a very good introduction to the problems of deforestation, rainforest protection and meaningful reforestation. Unfortunately, as far as I know, not translated yet.