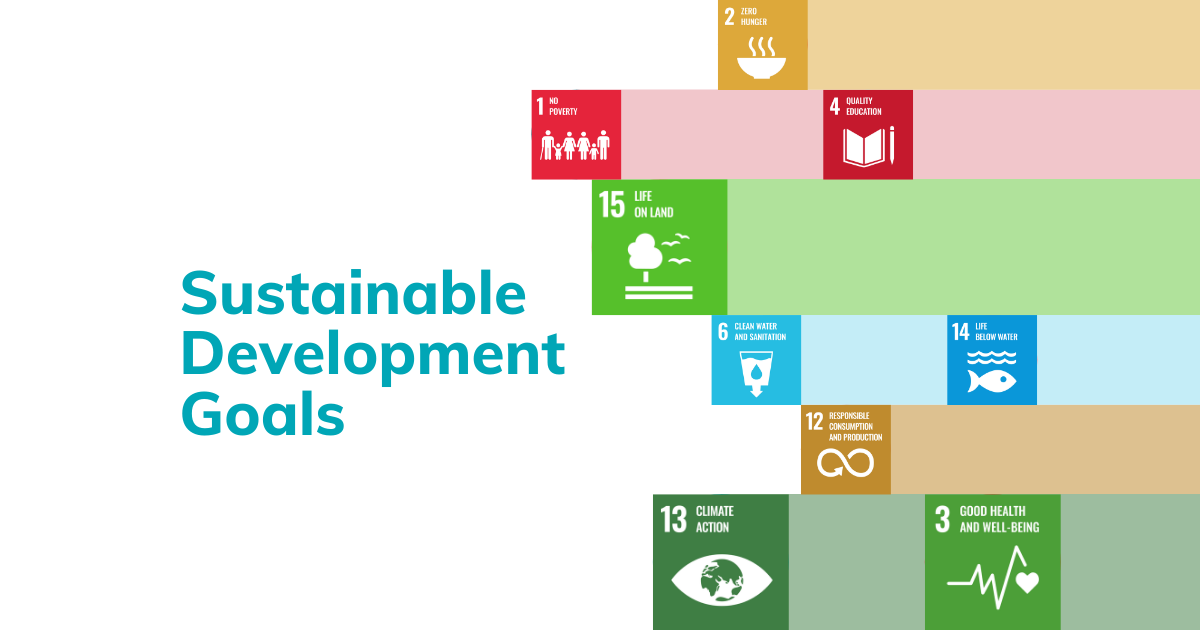 We have all seen them before, the colourful icons of the Sustainable Development Goals (SDGs). They catch the eye, concisely designed, belong to the UN sustainability goals – that much is known to most people. Since they are now to be seen also on our project pages, we take a closer look and explain a little bit of the background.

What is behind the term Sustainable Development Goals

The 17 goals are concretized in 169 targets and their progress is monitored and reported annually via 244 defined indicators (complete resolution, from p. 17 on list of goals and tagets).

Why the agreement on the SDGs was an important step

An agreement among 195 countries that is not completely diluted as the lowest common denominator is remarkable per se. The subtitle of the Agenda 2030: “Transforming our world” makes clear that the focus is on great things.

The SDGs actually stand out from their predecessors, e.g. the Millennium Goals, in several respects:

The goals are set high and thus a very good starting position. However, after a good third of the set duration, there is the suspicion from various parties that the historical objectives were ultimately only lip service.

What the status of implementation is

“We are making progress. Extreme poverty and child mortality rats are falling. Access to energy and to decent work is rising. (…) But let us be clear: we are far from where we need to be. We are off track”, stated UN Secretary-General Antonio Guterres at the first meeting of heads of government following the 2019 decision.

Since the data situation is very mixed, the current overview of the achievement of the goals looks very colourful:

The South and East Asian states have made the greatest progess. By contrast, the industrialized countries take a very ambivalent position. On the one hand, they are at the top of the rankings for absolute target achievement with up to 85% (Denmark, closely followed by Sweden). At the same time, consumer behaviour and living standards cause high ecological and economic costs for third countries. The OECD countries are at the bottom of the league table especially when it comes to indicators for climate protection and sustainable consumption. The extent to which the global targets can be achieved will therefore depend largely on them.

The assessment of Germany’s national strategy is very similar, as for example in a background paper of the German NGO Forum on Environment and Development (DE) on the occasion of the next upcoming revision of the German government’s sustainability strategy: The political relevance of sustainability goals is too often subordinated in practice, especially in agricultural, trade and transport policy. And there is a lack of indicators to measure the international impact of these decisions.

The current COVID 19 pandemic has a negative impact on almost all SDGs. The UN Children’s Fund UNICEF, for example, estimates that by the end of the year an additional 6.7 million children under the age of 5 could be affected by acute malnutrition as a result of the pandemic.

In his speech, Antonio Guterres called in the same breath for action now more than ever. The appeal is directed not only at governments, but also explicitly at companies, research and NGOs. In addition to a broad social consensus as the basis for major transformations, the transition to action must be promoted at various levels. For this purpose, for example, Uplink was created, a crowdsourcing platform for innovations on which ideas can be presented across the various thematic areas and global actors can network (direct link to the impact forum of the Trillion Tree Campaign).